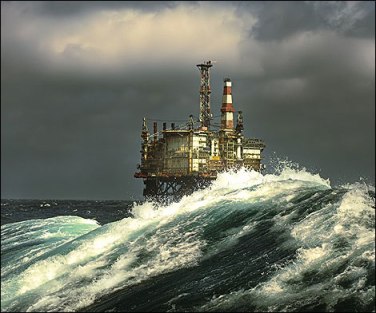 At the last SNP conference, Nicola Sturgeon announced: “Today we are on the verge of a second North Sea oil boom”.

Sorry, what?  Do I live on a different planet?  Why aren’t more people worried and really pissed off that a major politician is saying this sort of thing?  The Scottish Government’s recent optimistic statements on the future of the North Sea oil industry are proof as good as you can get that politicians have no intention of carrying out any drastic move away from exploiting fossil fuels.

They can get away with this by pointing to the Climate Change (Scotland) Act 2009, which is supposedly “world-leading” legislation in the fight against global warming. Forget that the government broke its first target in 2010 and in fact increased emissions by its own measurements. Or that it seems likely to miss its future targets.  But, much more importantly, its targets are far too weak anyway, if we read what climate scientists are saying. The government plans on a 42% reduction of emissions by 2020, and an 80% reduction by 2050.  According to George Monbiot, the developed nations in fact need to make a 90% cut by 2030.*   I’m trying to get my head round the situation in Scotland and I have a ton of questions about how the emissions in the Act are calculated. So if you know more about this, please fill me in.**

This article explains that if the present or future Scottish Government is to be successful in its plans for North Sea oil selling:

12-24bn barrels of oil and gas (BBOE) over the next 40 years for an estimated £1.5 trillion – the most oil available – [it] would mean the release of 5.2-10.4bn tonnes of CO2 into the atmosphere.That figure, verified by climate experts, dwarfs the impact of the Scottish government’s “world-leading” legally binding targets to cut Scotland’s CO2 emissions by 42% by 2020, down to 40m tonnes.

It has a parallel target to generate the equivalent of 100% of its domestic electricity needs from renewables by 2020, a policy that will save just 9m tonnes of CO2 by 2020, while only allowing new coal-fired stations that partly use carbon-capture technology.”

Apparently, though, the Government doesn’t think extracting and exporting oil has any “bearing on Scotland’s domestic carbon emissions” and that ” some of that energy use was covered by the European Union’s carbon trading scheme” (Ibid.).  This is complete hypocrisy.

I was really disappointed that people in the Scottish Left are repeating the SNP’s arguments on extracting as much oil as we can get.  One member of the Radical Independence Conference has written recently that, “rumours of the death of our oil industry are greatly exaggerated” and that we need to extract the £2.25 trillion – £4 trillion that really exists in the North Sea (i.e. every last drop).  A majority share of the oil industry should be nationalised and the revenue used to reduce poverty and unemployment.  As what felt like a bit of a footnote, they said that “we also need to tackle the question of climate and sustainability, by using the oil fund to build a green re-industrialisation that could be the envy of the world”.  But as the figures above show, this doesn’t add up.  I’m not saying  this writer is a hypocrite; the real hypocrites are those in power making green policies and then completely contradicting them.  The author here has good intentions about fighting inequality and genuinely seems to believe we can do both.  However, if this a commonly held view on the Left, it needs to be challenged.***

Climate change is an expression of capitalism’s pursuit of infinite growth, of private profit for a few through the exploitation of humanity and the planet we share.  It’s another example of how we need to rid ourselves of this system, not reform it. We want to force governments from the outside to extend the social wage – welfare, public services, pensions etc. – using whatever revenues they get.  But fighting for a better world means that climate justice has to be an integral part of organising for social change.  The poorest people in the world are already suffering from global warming and if things get much worse it’ll be them, not the global elite, who will have to deal with drought, famine and the loss of ecosystems.  And we don’t need oil to eradicate poverty, we already have many times the productive capacity to do that.  But that creative potential is based on decades of fossil fuel dependency that’s now threatening to burn our future.

Scotland is only a small part of the jigsaw, but demanding change here could influence other developed countries.  We need a fast transition from oil and other fossil fuels, much bigger emissions targets, no deep-sea drilling, radical changes to the way we consume and live, no fracking, and no greenwashing like carbon ‘offsetting’.

In his book Arguing for Independence: Evidence, Risk and the Wicked Issues (2012) the late Stephen Maxwell touched on some of the most important contradictions and problems for the independence movement.  What he said about global warming really hit me:

An independent Scotland would be unlikely to accede to the demands of the radical environmentalists for an end to the exploration for new oil reserves in the deep waters of the North Atlantic west of Shetland.  […] [I]t is a safe prediction that an independent Scotland like other oil producing countries will still untested oil prospects, including the UK and Norway, would be unimpressed [by environmentalists’ arguments].  Oil will almost certainly increase in value as energy demand from the industrialising developing countries grows and few countries will reject the promise of the greater wealth it offers.  Scotland would have particular reasons for pursuing the remaining opportunities.  Oil would be proportionately more important to the smaller Scottish economy than to the UK economy and a Scottish government would be under pressure in the final decades of oil to make up as far as possible for the £270 bn or more of revenues surrendered to UK control in the first four decades of production (p. 163).

Maxwell, whose book is well worth a read, suggests that the Independence movement could be criticised in the future if it follows Norway’s approach, citing Mark Curtis’ work. It’s worth unpacking this because it’s been raised repeatedly in the referendum debate.  Norway’s Oil Fund puts it above even other Nordic model countries and, as a result, it has one of the highest standards of living in the world.  Curtis, however, has shown that there are major problems with its policy from an international perspective.

On oil and poverty:  “A key Norwegian interest in energy is maintaining high oil prices to ensure a “maximum return” from its production. But this immediately puts it at odds with most of the world’s poor countries, who are oil importers. While they have been plunged in further poverty by the recent high oil prices, Norway has been profiting handsomely” (p. 9).

Oil and human rights: “StatoilHydro, in which the government owns 67 per cent of the shares, now operates in over 40 countries, including many that are corrupt, undemocratic or abusive of human rights, such as Azerbaijan, Algeria, Angola, Iran and Nigeria. Yet, as the MFA’s Refleks project states, Norway’s oil and gas industry “is completely dependent on succeeding in these markets”” (pp. 9-10).

Oil and climate change: “On the one hand, Norway is a world leader when it comes to clean environmental policy. Nearly all the country’s electricity comes from hydro-electric plants and it was one of the first to adopt a carbon tax to address global warming, in 1991. [….] But the other face of Norway is that it is a major and increasing environmental polluter with an enormous carbon footprint that far outweighs its aid allocations. Greenhouse gas emissions from Norway account for around 0.3 per cent of global emissions, according to the UN Development Programme (UNDP), although the government argues the figure is 0.2 per cent. However, if emissions from Norway’s oil and gas exports are included, the figure is much higher, and perhaps up to 2 per cent of global emissions.The Refleks book notes that emissions from Norway’s oil and gas exports are probably more than ten times greater than Norwegian emissions reported to the Climate Convention” (p. 12).

I’m putting these points in here not as an argument against Scottish independence per se.  Maxwell may well be right that an independent Scotland would want to intensify oil exploration and extraction, but I hardly think the UK would have a different approach.  Rather, these show how complicated the issues are and that we should be more critical about using Norway and the other Nordic countries as examples for reform.

* I’m reading his book Heat: how we can stop the planet burning (2006) right now. It’s a great introduction to the topic, but I’m pretty sure things have moved on a bit since it was published.

*** Other socialists have also questioned extracting all the North Sea oil and pointed to a TED lecture on this topic that will make you want to curl up into a ball and cry.